Watching cricket in New Zealand is an experience like none other. Already in the last ten days, we have been to four different grounds, each one unique, each outing a treasure trove of memories.

The twin beasts of anticipation and anxiety are complementary forces every time you embark on an overseas cricket tour. It is particularly true for the primary protagonists, the players themselves; the various support cast, including the travelling media, aren’t immune to these phenomena either.

So it was, all nervous energy and still groggy from long flights and the subsequent jolt to the body clock, that one lumbered towards Eden Park in Auckland to watch India’s first practice session of their six-week tour of New Zealand. The country of sheep and smile had put on a typically pleasant welcome on arrival – ‘Here for the cricket? Enjoy yourself’ was followed by a directive to walk through the green channel at the airport and out into the late-night sky – but Eden Park, as one was to learn later, has rules of its own.

As I approached Gate J, the designated media entry point, the lady manning it politely told me to get in touch with my ‘contact person’ and ask him to bring my accreditation along. Then, casting her eye toward my feet, draped as usual in floaters, she said with excellently concealed disapproval, ‘I am afraid you can’t go in without shoes, sir.’ It hadn’t been thus in 2014, I was about to protest, when I remembered a pithy line from a friend – ‘Their house, their rules.’ Cab trip to the hotel and back later, the same lady opened the gate wide, beaming, ‘Sorry about that, sir.’

Welcome to New Zealand, indeed! With a few more rules than previously, but no change in their attitude, behaviour or mindset. They smile because they mean it, not because they have to. They don’t say, ‘How’re’ya doing’ and then walk along without waiting for an answer. They also don’t mind telling you, ‘We try and help as much as we can.’

Watching cricket in Kiwiland is an experience like none other. Already in the last ten days, we have been to four different grounds, each one unique, each outing a treasure trove of memories. The curiously shaped Eden Park in Auckland, all sharp angles and none of the circular curves of a cricket ground. Seddon Park in Hamilton, as much a cricket venue as you can get. The recently renamed Sky Stadium in Wellington, a multi-purpose facility where cricket and rugby compete for space with concerts – Queen’s three-leg Rhapsody Tour of New Zealand kicks off at the Sky on 5 February. And the scenic Bay Oval not far from the sea, a salt processing unit in operation nearby, providing a Cape Town-like feel where the Castle brewery overhangs Newlands.

Eden Park and The Sky are typical concrete jungles, the former with a capacity of 50,000, the latter seating 34,500. Seddon Park and the Bay Oval are quintessential Kiwi with sprawling grass banks allowing the spectators to be more expressive, more unshackled, less strait-jacketed. Especially when India are in town, there is a festive buzz to the air; in Mount Maunganui, for instance, the dhols were out in full force while in Auckland, groups of dancers swayed to Punjabi songs and music both during play and in the break between innings, with amused and enthralled New Zealanders gathering around them and involuntarily tapping their feet to the beat.

There was a time in the past when one of the sponsors of New Zealand Cricket, a beer manufacturer, hit upon the excellent idea of doling out cash rewards for one-handed catches by spectators to the big hits cascading off the bat during every white-ball internationals. The only catch, pun intended, was that the said spectator had to be clad in the distinctive orange tee-shirt of the said company and be wearing a lanyard around the neck. Even the die-hard Indian fans couldn’t resist the lure of NZ $50,000, so every ground would be awash in a sea of orange slipped over blue India tees. With that campaign having been put to bed, now the stands are as full of blue in Auckland and Hamilton as they are in Ahmedabad and Hyderabad. 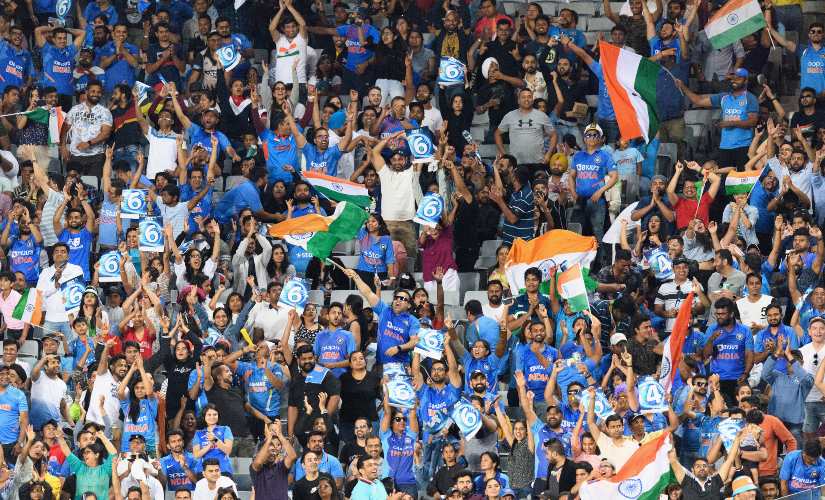 The sprinkling of locals in this vast expanse of blue are neither resentful nor disapproving of the song-and-dance routine of Indians who have either made the long haul to the country of the white fern on a permanent basis, or the numerous students and professionals out to make a name for themselves. Their applause at home success is drowned out by the cacophonous din of the Indian supporters, never mind if the turnout is 20,000-plus like it was at Eden Park, or a less populous 6,278 at the Bay Oval. But where we might sense noise, the home fans identify passion and pride. It’s an easy amalgamation of vastly different cultures co-existing seamlessly, without rancor or ill-will. If only the whole world were thus.

The one thing the Kiwis don’t take lightly to is pitch invasions. Security staff are trained for such acts of idiocy – we saw two of those in the space of five minutes at the Sky, both invaders of Indian origin, both wrestled to the ground and ignominiously hauled out of the venue. The one thing New Zealand have in plenty is space, and they hate their space being intruded upon. Equally, they hate intruding on other people’s space, which is why India’s cricketers who are so fearful of being mobbed when they step out in public territory back home are able to walk the streets here without having to look over their shoulder or be apprehensive about a ton of requests for selfies.

Not long after he landed in Auckland, Kohli as usual hit the nail on the head when he was asked how a tour of New Zealand compared with, say, travelling to Australia or England. “It is much more relaxed,” he said without pause. “Every tour is a representation of how people look at the game in that region and in New Zealand, the game is looked at as a job for the guys that play the game. It is not larger than life or the most important thing in life. It is part of the Kiwi culture and it is just a sport. They get on with it but they also play really hard and want to win the game. They are dejected or depressed if they don’t win, so I think it is a wonderful balance. Every team that comes to New Zealand loves this tour because you can just focus on what you need to do as a team, yet don’t get too emotional or caught up in what happens on the field. The Kiwis are the most relaxed and chilled out and professional about what they do.”

The turn-outs for the Twenty20 Internationals have been disappointing, to say the least, but even when there are massive numbers, entry to the stadium is both swift and trouble-free. The security is common-sensical and non-intrusive; that the gates are opened only an hour and a half before the start is itself testament to the ease of the process of entry, even at the sprawling Eden Park which when full can pack in the entire population of St Kitts.

Net facilities at a majority of the grounds are almost by the roadside; those out on a stroll, or those more invested in a close sighting of India’s superstars, can watch practice sessions from less than 30 yards and a couple of layers of translucent security checks away. It’s at once exhilarating and unnerving for obvious reasons; to the players’ credit, they remain focussed enough not to let the squeals of delight affect them, as unaccustomed as they are to practicing in such naked environs. 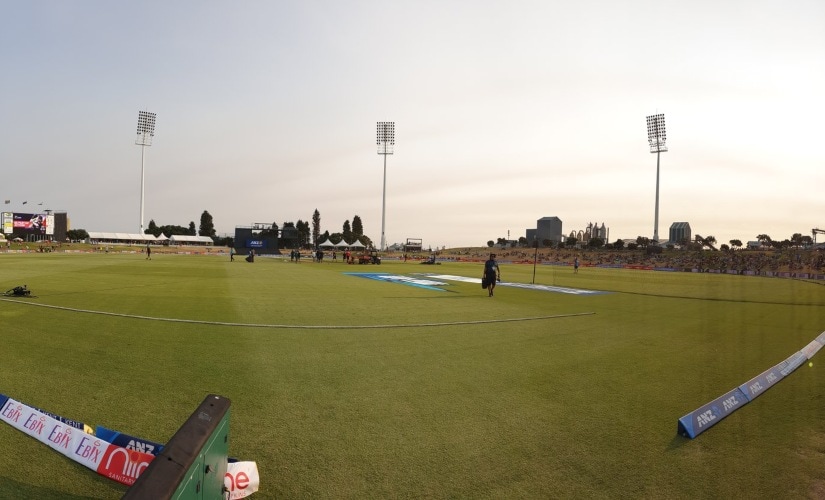 Every press box, New Zealand journalists comprehensively outnumbered by the travelling corps, is a work of art, too. At Eden Park, it is on the concourse on Level 3, with a reasonably straight view and big enough to house some 25 journalists. Seddon Park offers a less elevated vantage point but can at best seat 15 people, while at the Sky, a tiny metal ‘bridge’ must be negotiated to get into the ‘Western Press’ enclosure from where the third umpire’s duties can be carried out with aplomb, so square of the pitch is it located. At the Bay Oval, we are at ground level in a marquee, buffeted by strong winds but able to hear the loud thud of ball on bat, of calls while running between the wickets and of fielders as two or three converge under a skier. Unfettered by the glass walls that usually cocoon us in a bubble of insularity, the Bay Oval helps revisit memories of more than 20 years back, when the Harare Sports Club in Zimbabwe offered a similar tented experience.

The guys in charge of wifi passwords have a sense of humour alright. Thus you have ‘catch1t!’ at one venue, ‘wewillrockyou2020’ in another, ‘closertotheaction’ at a third. We only have one new centre to travel to over the next month. Wonder what Christchurch has in store for us.

The one thing that has stood out the most is the transportation of the sponsors’ backdrop to the press conference room. There is only a solitary backdrop – expertly assembled and disassembled by the NZC media team – that travels the country, so the post-match press conference cannot/will not begin until a few minutes after the post-match presentation where also the said backdrop is employed. It’s a practical, prudent move. Why waste money on backdrops it can be put to more gainful use elsewhere?

*Note:- It's not a betting site. We only gives you result with our 10 years of experience.
Do you like cookies? 🍪 We use cookies to ensure you get the best experience on our website.
For better experience please use (Chrome v51, Firefox v54, Opera v38) or above versions.